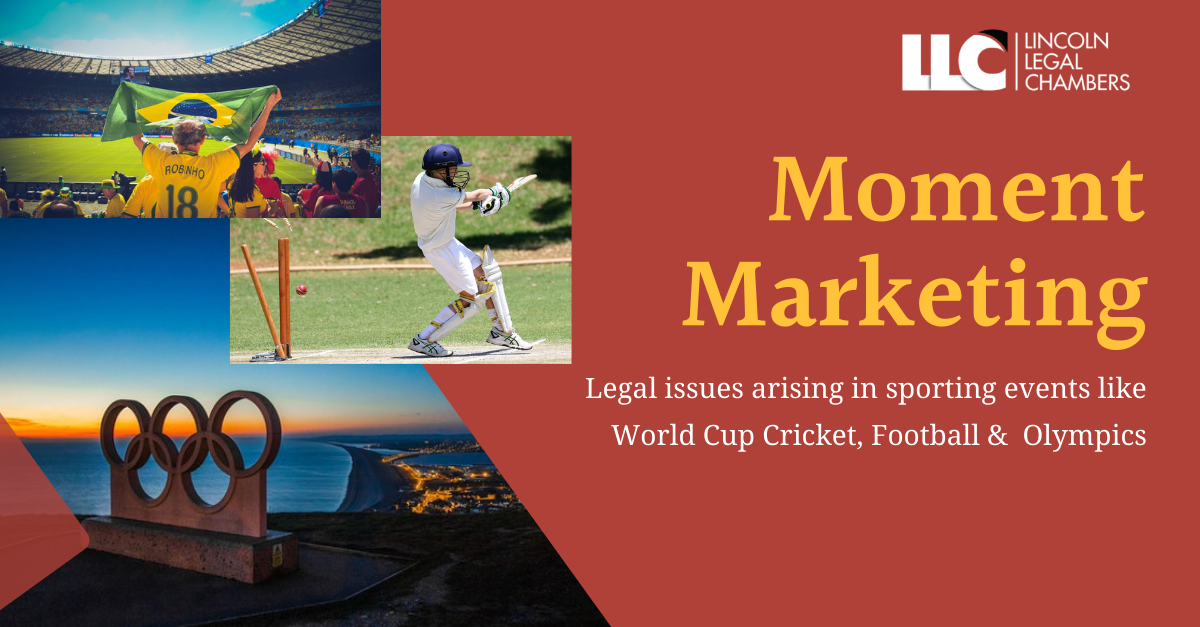 “A free ride that could turn costly”

Digital marketing & social media campaigns for brands are continuously updated round the year. However, it is during momentous global events that brands are often seen to play on the event’s momentum to use it to their advantage. The Cricket World Cup for instance, is an opportunity for many emerging marketing agencies to grow an audience through moment marketing. The basic premise of moment marketing is that it is a promotional technique employed by brands in the social media and digital advertising era, and also remarkably used in the pre-digital era through physical media, to create a relevant message at the right time to potentially draw in the largest traction & audience engagement.

One interesting and a lesser-known example where moment marketing had been successful, was in 2015 when the wrong winner was announced for the Miss Universe pageant & the crown was taken away and given to the actual winner. Famous food chain Burger King instantaneously saw this as a marketing opportunity and as a campaign started handing out plastic toy crowns with every burger meal stating that, ‘their iconic crown was one that everyone could keep’. The tweet and marketing campaign gained massive attention and engagement receiving thousands of retweets & likes on Twitter.

One of the more heated differences arose between Coca-Cola and Pepsi in the year 1996 as both were eyeing to be the official sponsor of the 1996 Cricket World Cup. In the end, Coca-Cola had bagged the official sponsorship rights to the World Cup. However, Pepsi used moment marketing in retaliation with a groundbreaking campaign having an outrageous tagline: “Nothing official about it”. Pepsi’s campaign was the first of its kind in India and was a spectacular example of how brands could stand out despite not being official sponsors at big events such as the World Cup, demonstrating the power of moment marketing.

Does anyone recall Charulata Patel? An 87-year-old Indian origin grandmother from London who was in the news for endearing herself to Indian cricket fans by hugging-kissing-blessing Virat Kohli and Rohit Sharma, was signed with Pepsi for an advertisement. A digital post announced ‘Coming Soon Pepsi’s Swag Star’ with a picture of Superfan Charulata. It was not just a social media tribute to the fan, but was a timely seized unique digital campaign along with an acknowledgment to the undying love for cricket in the country.

Online food delivery platforms such as Swiggy and Zomato are known to offer heavy discounts to consumers during the pendency of sporting events of the likes of the World Cup. Bira 91, for instance, an official partner for ICC England and Wales World Cup 2019, launched a campaign across India partnering with over 900 restaurants across the country.

Now that the world is in the grips of the pandemic, many brands have come forward to put out responsible messages and look out for the community at large. This is a great way to nurture customer loyalty. These examples from some of the world’s biggest brands show that moment marketing is not merely a fad, but a marketing tool used extensively by brands like Amul Butter ‘known for milking topical issues’ over the years, and is now becoming all pervasive in the digital age. Amul Butter advertisements from yesteryears conjuring display or publication promotions related to prevalent events or sporting achievements was probably one of the most noticeable campaigns that involved moment marketing.

Many view moment marketing in a positive light for pouring in engagement by using an overtone of a particular event like the World Cup and not any specific sports person without his/her consent, especially as World Cup and cricket contracts are heavily regulated with stricter intellectual property rights clauses. Conversely, some campaigns for events like the Olympics are considered unethical on the brand's front to leverage an athlete's name without consent in the absence of a detailed contract like the ones available for World Cup players.

It is common for brands to act on topical discussions with their own take on something that is trending and by doing so, they make use of individuals and their names to make the most of the trending moment. As previously mentioned, many brands over the years, have built a considerable social media follower network piggybacking on moment marketing.

One of the more recent controversies emerged when leading badminton player PV Sindhu winner of a bronze medal at the Tokyo Olympics 2021, sent out legal notices to many companies for having used her name and pictures in advertisements without her consent. Sports marketing firm Baseline Ventures that managed the portfolio of the badminton player had sent notices to brands like Happydent, Pan Bahar, Eureka Forbes, ICICI Bank, HDFC Bank, Vodafone Idea, MG Motor, UCO Bank, PNB, SBI, Kotak Mahindra Bank, Fino Payments Bank, Bank of Maharashtra, Indian Bank, Wipro Lighting among others for using social media to congratulate the player for her bronze win at the games and using her name and pictures along with the company logo in the posts.

The bigger picture is based on the International Olympic Committee (IOC)'s Rule 40 that stops athletes from endorsing any of their partners. Rule 40 is a somewhat controversial rule of the Olympic Charter that prevents athletes who are competing in the Games from allowing their name, image or sporting performance to be used in advertising during a ‘blackout period’ (just before and during the Games) without the prior permission of the IOC.

In 2012, athletes protested against the rule being too restrictive, preventing their long-term sponsors from getting any credit at this key time. The International Olympic Committee ("IOC") has since reflected on this and taken a new position since Rio 2016. Effectively, National Olympic Committees are now permitted to take a country-by-country approach to implement the rules in respect of their own team and territory. Countries like the UK have adopted a relatively relaxed stance on the rule as members of Team GB continue to honour the rule in majority of circumstances but deemed consents allow some continued use by sponsors, for example on a sponsor's website catalogues. Express waivers may also be granted for some above-the-line long-running campaigns where the athlete is featured as a 'famous face', and not in a sporting context.

While the relative relaxation of Rule 40 by some NOCs will undoubtedly be welcomed by athletes, it is not yet clear whether this will be sufficient to satisfy them and their sponsors.

It is not the first time when brands have used ‘moment marketing’ but lately such brands are coming under the scanner of Advertising Standards Council of India (ASCI). This remains the main reason why sports marketing firms are taking legal action against brands using names of athletes during sporting events.

Brands need to be careful when looking to use the name, picture and other likeness of well-known personalities and celebrities, including sportspersons as such personalities and celebrities have the right to control the use of their name and/or picture falling under the canopy of Personality Rights/ Publicity Rights. Courts in India and around the world have consistently upheld and recognised such rights and have struck down any unauthorized use.

Advertising Standards Council of India (ASCI) has said ‘brands piggybacking’ on athletes winning medals in the Tokyo Olympics in their advertising without permission are in violation of its code.

The debate surrounding moment marketing should really be about ethics of marketers, as they tend to forget the most important word in communication: permission. Not seeking permission is the first sign of lacking ethics in moment marketing. Not seeking due permissions, in turn affect the earnings of these athletes and jeopardies the entire marketing ecology.

While it is appreciated that ASCI guidelines are not legally enforceable, their violations are treated as a violation of government’s rules.

To ensure brands do not infringe upon the privacy of celebrities, the Advertising Standards Council of India (ASCI) already has a code in place, as the ASCI Secretary-General added that such ads could mislead consumers to think that the athletes genuinely endorse their products. The Guidelines for Influence Advertising on Digital Media issued by the ASCI were made effective in India from June 14, 2021 and such guidelines have been formulated keeping in mind that consumers tend to see posts on digital media and that becomes inherently misleading. It is very difficult to distinguish between a direct association and a congratulatory post or show of support by a brand and hence violative of Clause 1.4 (misleading by omission) and Clause 1.5 (abuse trust of consumers or exploit their lack of experience or knowledge) of the ASCI Code.

Considering that non-cricket sports and their personalities do not get much visibility ordinarily, these controls will unfortunately make them even less visible, and brands will err on the side of caution. Moment marketing around sporting events will get constrained. Brands should therefore display more maturity and seek permission from athletes or their agents before using them overtly or covertly as such brand associations could actually help sportspeople monetarily.