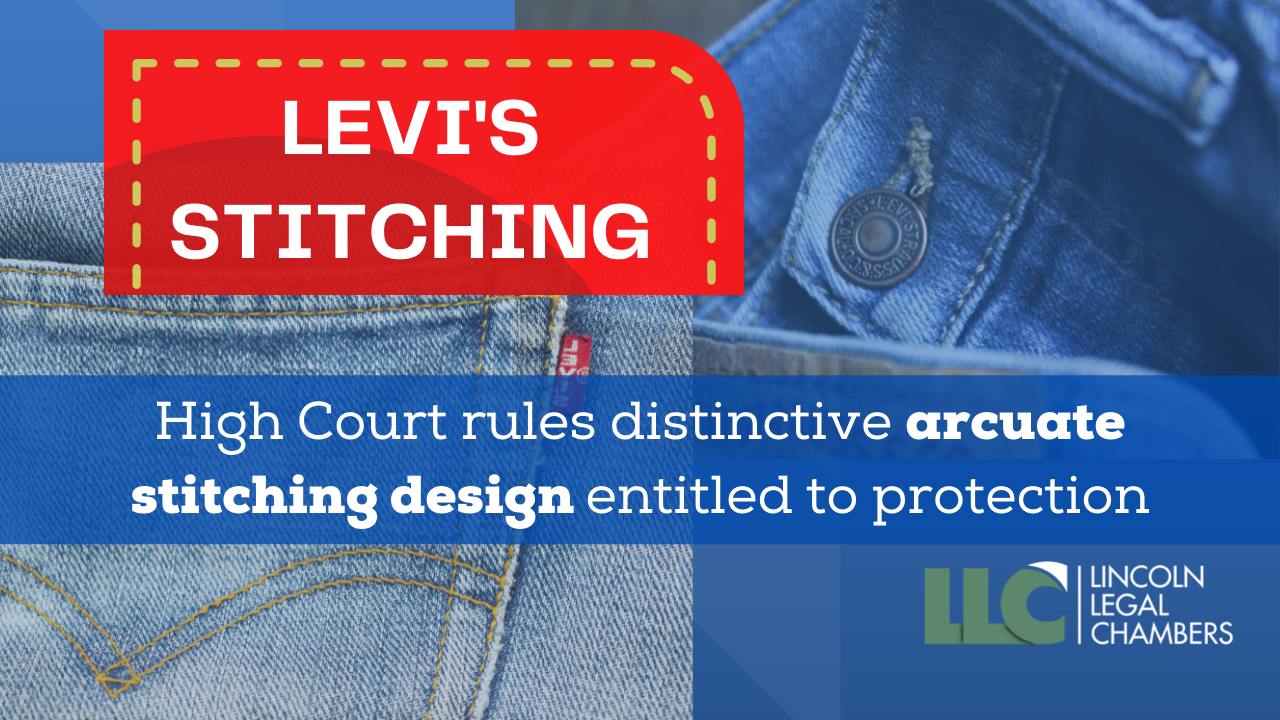 Levi Strauss & Co., makers of the globally renowned Levi’s jeans brand, recently won a trademark infringement case in 2022 before the Delhi High Court. They had filed the suit to seek protection for their stitching design, specifically their arcuate stitching design mark which, according to them, was adopted and used since 1873 on various textiles manufactured by the brand. Through the suit, Levi Strauss sought permanent injunction restraining the trademark and copyright infringements as well as passing off in respect of their stitching design.

“Arcuate”, often referred to as back pocket signature, is the patten or design of stitching that is done by the manufacturer on the back pocket of a jeans bottom wear. The word arcuate, meaning curved or shaped like a bow, originates from Greece.

Levi Strauss, on its website, states that their Arcuate is a unique Levi’s identifier which has been used on their jeans wear since it was adopted in 1873. The company had received a trademark protection for the said back pocket stitching design on 16th November, 1943 in USA and celebrated 75 years anniversary a few years back in 2018 of the said protection. It can be arguably stated that the most iconic arcuate on jeans belong to Levi’s. The design are made of two rows of stitches that are shaped like bat wings. After 1973, Levi’s even began to refer to the pocket design as Arcuate in its company documents.

The suit was filed before the Delhi High Court by the Plaintiff (Levi Strauss) against the Defendants Imperial Online Services Pvt. Ltd. & Others for selling denim jeans with identical arcuate stitching design mark through their website, other e-commerce platforms and even on popular e-retail portals like amazon.in, flipkart.com, nykaafashion.com, myntra.com, snapdeal.com, limeroad.com and paytmmall.com.

Prior to the suit, Levi Strauss had issued notices to the infringing parties (defendants) subsequent to which the latter, through their legal counsels, had executed an undertaking whereby they acknowledged the sole and exclusive rights of Levi Strauss in the arcuate stitching design. The defendants also undertook that all infringing products would be removed within 6 months; and that no further manufacturing, distribution or sale would be done with the infringing mark or a stitching design similar to Levi’s.

It was contended by the Plaintiff Levi Strauss that the infringement continued despite the undertaking and products with infringing ‘stitching design marks’ were being manufactured as well as sold on different platforms. Therefore, Levi Strauss filed the case before the Delhi High Court praying for various injunctive reliefs.

The High Court, vide Order dated 22nd December 2021, had granted interim protection to Levi Strauss by restraining the Defendants from manufacturing, marketing, offering for sale and selling any goods specifically denim jeans bearing the infringing arcuate stitching design mark which is identical to or deceptively similar to Levi’s design.

The Plaintiff had sought protection of the arcuate stitching design mark against any misuse by the Defendant. In its final judgment dated 24th March 2022, the High Court recognised that the definition of mark under the trademark law had evolved over time and even though originally the trademarks had included only names, words, devices, logo, labels/packaging, letters, numerals etc., the list had since enlarged to incorporate colour, combination of multiple colours, goods shapes, product patterns, smells, sound marks thus categorising marks under traditional and non-traditional trademarks.

The Court delved into the question as to whether mere appearance of a stitching pattern could perform the function of a trademark by associating the goods with the Plaintiff brand as the instant case related to a pattern which was not a product design, but only a pattern or design which was applied on the Plaintiff’s products.

The Court did note that many stitching patterns could be only for aesthetic or visual appeal but if the trademark owner’s stitching identifies the jeans brand, without any reference or appearance of a name or logo, then the Court would have to scrutinise whether the pattern was distinctive or had acquired any meaning. The Court further observed that the test of acquired meaning was similar to the test of secondary meaning applied to descriptive words. The Delhi High Court also cited a US case law Lois Sportswear, USA, Inc. v. Levi Strauss & Co., 631 F. Supp.735 (S.D.N.Y. 1985) in which the US District Court had held that Levi’s arcuate mark was a strong mark that qualified for a high degree of protection and that the arcuate mark was a fanciful design which had no function other than as a source indicator. It was further held by the US Court that the Levi’s arcuate was not merely a fragment of a larger mark but instead had an independent degree of recognition and connection with Levi Strauss.

The Delhi High Court also recorded that the US District Court’s decision had been also affirmed by the US Court of Appeals, Second Circuit in Lois Sportwear, U.S.A., Inc., v. Levi Strauss & Co. 799 F.2d 867 (1986). The Court of Appeals had held that the US trademark statute bars one jeans brand from using another jeans brand’s back pocket stitching pattern trademark when it can be evidenced that the pattern is intricately connected with its brand and the infringing copying will cause confusion regarding the identity of source and thus also affect goodwill.

The Delhi High Court opined that the stitching design had become distinguished to the public that buy or use garments with the said mark and hence the use of the design with/on any goods or services would therefore be instinctively construed as having a link between the goods/services and the Plaintiff Levi Strauss.

The Court acknowledged that the Levi’s stitching mark was an exceptionally distinctive mark that had acquired secondary meaning owing to widespread use by Levi Strauss on its jeans and hence permanent injunction was allowed against the Defendants.